It has been revealed that Nigerian schools will soon stop teaching students Mathematics and Science using the English language. 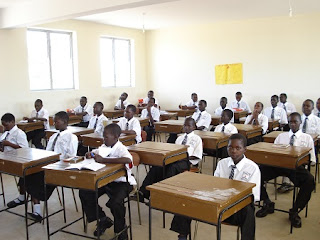 Dr. Ogbonnaya Onu, the Minister of Science and Technology, has said plans are underway to ensure that primary schools in the country teach mathematics and science subjects in indigenous languages.
The plan is meant to encourage the application of science and technology in the country, Onu said.
The Punch reports that the minister stated this while addressing pupils of Ekulu Primary School in Enugu, the Enugu State capital.
Onu was at the school to present computer sets and other science kits donated by the Ministry of Science and Technology to the school.
Noting that Nigeria’s future depended on how effectively it applied science and technology, Onu said the country could one day send scientists into space.
The minister said the Federal Government was worried about the low interest in mathematics and the sciences in primary and secondary schools across the country.
The problem can be addressed by “popularising” the subjects, he said.
Onu stated, “The Ministry of Science and Technology is worried over the low interest in mathematics and the science subjects, so, we are working on plans to teach mathematics and sciences in indigenous languages in primary schools.
“These pupils grow up with their indigenous languages at home before they start going to school, where they are now taught in foreign languages. So, we have observed that there is a challenge to understand the foreign languages first before they could even start understanding what they are being taught.
“We believe that this plan will help our students to understand mathematics and the science subjects, and also promote the application of science and technology for national development.”
He added that some countries that were making advancement in science and technology, such as India, adopted a similar strategy.