Home » (TRUE LIFE STORY) I SEDUCED HIM, HE RAPED ME (by mr kiddah) 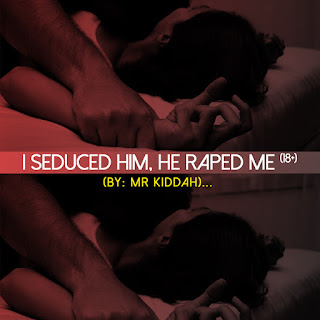 Note: This is a true life story, all names are fiction.

My name is Anita, I’m a very beautiful and sexy lady of age 18. Although I’m young but I look way older physically with my body and this has been a thing of joy to me as I’m every guy’s  favorite, and even married men. They all want me. Only God knows how I managed to keep my virginity till now.

Eventually, everything changed for me when my school went on a 4month strike and my mom advised that I should stay with my uncle in order to learn fashion designing from his wife. I never knew things would turn around for me there. Along the line, I got to my uncle’s place and indeed It was like a carbon copy of the prophesied paradise, compared to my own place that I usually do brag about. While I was lost in thoughts and admiration about the building, a hot, handsome, sexy and good looking guy caught and swapped my attention. Immediately I saw him I fell in lust as mere staring at him got me wet and turned on. That, I won’t deceive you was a moment of good feeling for me.

The day after, I was home alone ,although not without this guy who happens to be a brother to my Uncle’s wife. He was in the sitting room, watching the review of a football match and so I decided to seize the one of a kind opportunity.
I seductively walked towards where he was sitting and had my sit closer to him. My main objective was to see if he’s actually into me, not knowing that he has other plans for me.
I broke the silence by complaining to him about the unbearable heat in the house despite the fast running standing fan and went further to  seductively pull off my t-shirt and wears under it, my bra inclusive.
Revealing my full grown breasts to him, I was so disappointed by no iota of reaction from him and I had a quick thought that He has no interest in me, (what every other man could kill to have). He just stood up and went inside without uttering a word.

Later in the night around 11:50pm, I heard a slow and silent knock on my door and wondered who it could be. Having looked through the windows and confirmed that our gates and walls hadn’t been broken by a thief, I decided to open the door and Surprisingly and It was john my uncle’s wife’s  younger brother. Before I could lift my lower lip to meet the upper lip or say a word, he carried me, threw me on the bed and took off my pyjamas. At first I was Disturbed by the strange actions but then I thought… “This is my wish “. Slowly, he touched me and steadily,he moved his hands all over my body. at this point I had forgotten I He continued by placing a kiss on my nipples. Immediately he did this, my nipples stood erect like a full grown dick. Then He moved his lips up to mine.  And showed me he’s a real good kisser. Colloquially, John can kiss for Africa… And i’m no learner either.

Still lost in the romantic session, john made another move that murdered my soul, he moved his right hand fingers to my panties, he touched it and instantly, I felt some liquid flowing out down me. He rolled down my panties and afterwards, got himself naked. I saw what he’s got and murmured ‘’ blood of Jesus’’ John was big, long and sexy down there…
In the blink of an eye,  and forgetting to use a contraceptive, he inserted his joystick to my USB port and it felt really painful to the extent that I screamed and woke up my uncle and his wife. They rushed and barged into my room to see what was happening.

What a smart guy john was!  He had dashed into his room before my uncle and his wife could get out of their room. I quickly put on my pyjamas too.
When they came in looking worried, I lied to them that I had a terrible dream where my mom died… then they prayed with me and left for their room. John didn’t even allow them to close their door before he rushed back inside my room looking at me in a lustful manner…. He had come to complete what he started… John wasted no time in jumping over me, covering my mouth with one of his hands and forcefullyinserting his dick into my pussy and causing a pleasurable pain to the extent that i solemnly cried. It got to the point that I couldn’t bare the pain any longer and wanted him to stop but he cared less.
After 45 minutes of having a memorable moment of sex, he left for his room like nothing had happened..

….Unfortunately for me, I seduced john , I wanted him but all I could get was to be raped…

Watchout for more short stories from me every Friday….