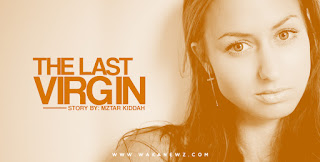 read epi 6 here
EPISODE  7 (THE JOURNEY CONTINUES)
**Oge’s side of the story**
**thinking**
Hmmmm what will I do now, where will my parents get that huge amount of money , what will be my mom’s condition now because she’s very hypertensive and unknown to me Elizabeth and Cynthia are both in another gbege in the police station…. Abeg shey na by force to be virgin ni?
**folake’s side of the story**
Hmmm come to think of it, am I not the one that led Elizabeth and Cynthia to the police station, I did not really think about it well, what can I do to save my friends….
While I was busy thinking and pondering on what to do  I saw an envelope on funke’s bed , and when I opened it I saw a letter in it written by funke before she committed suicide, alas there is a proof to get my friends out of the police custody …….
**Oge’s mom side of the story**
while I was still brooding over the new development a call came in and I was informed that my husband was involved in a serious accident and he has been rushed down to the hospital, gbege meets gbege , kasala meets kasala..
**in the hospital**
On getting to the hospital I was told my husband needs an urgent operation and I’m to deposit a sum of  #500,000 . on hearing this I screamed because I don’t know who to run to now, my daughter is been held captive by kidnappers with a ransom request of #1million naira before she can be released …. I rushed to my bank and withdrew all I had (#750,000) after that I made a deposit of #500,000…..
**Folake’s side of the story*
I rushed down to the police station to save my friends and luckily for me they were still debating on what to do, few mins later after giving them the letter my friends were released and they were highly disappointed in me, later on I received the bad news of oge’s current situation so we decided to visit oge’s parent………..
**oge’s residence**
On getting there we were informed about the new development so we rushed down to the hospital and  on getting there the unexpected happened………….
**Oge’s mom side of the story**
I was busy welcoming oges friends before my phone rang ……..
Me: hello
Strange voice: we are at the drop off and we could not find the money there
Me: I I I i……..
Before I could say anything I heard a gun shot with screams , while I was still pondering on this the doctor rushed towards me and broke d sad news to me that my husband is dead…………
GBEGE JAMS GBEGE