Home » SignOut 2016 SET TO STORM UNIOSUN… ARE YOU READY? (CLICK FOR MORE DETAILS) 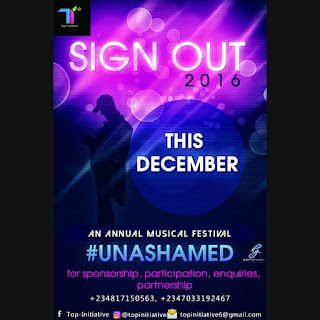 “SIGN-OUT“ is one of the biggest annual musical concert in Osun State University, organised by TOP-INITIATIVE . This is a musical festival that is organised yearly to bring diverse people together to celebrate the end of the year with good music. “Sign-Out“ is a live musical concert that gives a platform to Nigeria youth (university artistes) to experience stardom on the big stage and to celebrate their creative mind of music.

Top-Initiative organised its first SIGN-OUT edition in 2015, which was tagged “SIGN-OUT2015(DaXmasConcert), held at Osun State University, Ikire campus, on December 16,2015, with over 1000 youths in attendance from the institution.

This year’s edition of sign-out  has been tagged SIGN-OUT2016 “UNASHAMED“. The reason for this theme is not farfetched owing to the fact that the end of the year is an opportunity to make people reminisce on the various activities they have laid their  hands upon during the course of the year. The outcome of this activities might either be good or bad, but they can still come out and say they are UNASHAMED of all the decisions they have taken despite the actions. Even though things are not as it should be, we can all say we have all grown to be better persons. This means that as long as we  can all see the end of 2016, we are confident that 2017 will be better.

This year’s edition is promising to be more exciting with live musical performance(s), comedy, dance and other intresting features to make you enjoy the season. This will involve the six(6) campuses in OSUN STATE UNIVERSITY  and also our good friends from UI, OAU, UNILAG, LEADcity, KING’S University, OUI and other intrested institutions.

This great event will be held on a date that will be announced soon in December,  in Osun State University, Ikire campus.