Home » See What Wizkid Was Caught Doing To A Lady During Music Video Shoot. [Pictures Attached] 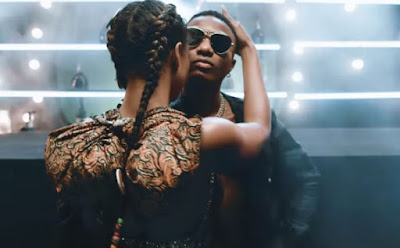 The picture below has revealed that Wizkid kissed a video vixen during the video shoot of a song which he got featured on by Ducan Mighty, the song is titled Fake Love. In the picture below, you will notice lips touch and if you would like to see it in a video, Click Here To See The Video. Actually, the facial expression which is the smile on the vixen’s face after the scene after revealed something really happened!.