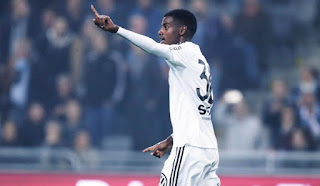 Real Madrid will pay a Swedish record transfer fee to sign striker Alexander Isak from AIK Solna, according to Aftonbladet.
The Bernabeu giants appear to have won the race to sign the 17-year-old and they will pay a fee of €10m, which exceeds the €7.8m fee Ajax paid Malmo for Zlatan Ibrahimovic back in 2001.
According to Aftonbladet, he will put pen-to-paper on a five-year deal before arriving in the Spanish capital in the summer – when Real’s transfer embargo comes to an end.
Isak has been widely-hailed as his country’s biggest talent since Zlatan, after making his breakthrough in the Allsvenskan last year at the age of 16.
Scouts from across Europe have flocked to the Friends Arena to watch the youngster’s rise to prominence, which included a brace in the derby win over Djurgardens.
According to one Swedish newspaper, as many as 67 representatives of clubs across the continent were in attendance when AIK travelled to Gothenbourg in October.
He made his international debut for Sweden earlier this month against the Ivory Coast and became his country’s youngest-ever goalscorer after netting in a 6-0 win over Slovakia, breaking a record that had stood for 105 years.