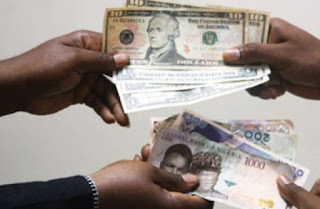 The naira is set to witness another round of decline against the dollar in the days ahead as expected increase in dollar flows from Nigerians living abroad coming home for holidays fell short of expectations.The local currency closed at 490 to the dollar on Friday, from 495 against the dollar last Friday at the parallel market, Reuters reported.In the official interbank window, the naira was quoted at 310.25 to the dollar on Thursday, but it was expected to close at around 305.5, the same level it has traded at since August.“We see the naira depreciating against the dollar by the time more businesses resume operations next week after the festive season as dollar liquidity remains thin in the market,” one currency dealer said.Currency experts have predicted the naira will weaken against the greenback as the New Year approaches.Specifically, they said the naira might fall to 500/dollar this week.The naira has been under severe and continuous pressure as the scarcity of the US currency continues to create ripples in the financial markets and economy.A director at Union Capital Markets, Mr. Egie Akpata, said it was really difficult to predict the direction of the naira currently because part of the currency market had shut down for the year.“You can’t really predict the market now because part of the market has shut down for the year. Things will really take shape next week. Currently, it could swing anywhere,” he said.