A letter from boxing legend, Muhammad Ali to South Africa’s legendary leader, Nelson Mandela has been sold at an auction.
The letter, expressing Ali’s condolences to Mandela on the death of a freedom fighter, Chris Hani was sold for £7,200 at an auction in Devizes. 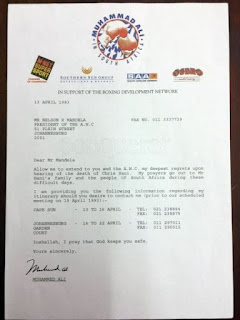 Auctioneer Andrew Aldridge said: “It’s fair to say Mohammad Ali was the greatest sportsman of all time and Nelson Mandela was one of the greatest figures of the last century.”
“It is a truly iconic cross collectable and will appeal to collectors of Ali memorabilia as well as those who collect Nelson Mandela material, items relating to apartheid, political history and collectors of iconic memorabilia,” Mr Aldridge added.
Muhammad Ali was only in South Africa for a short period in April 1993, arriving shortly after the assassination of Chris Hani on 10 April.
“Hani was the chief of staff of Umkhonto We Sizwe, the armed wing of the African National Congress (ANC).
“He was a fierce opponent of the apartheid government and was murdered by a far right extremist outside of his home in Boksburg.
“Against that backdrop Ali arrived in South Africa at a time when the country stood on the edge of a precipice with civil war a possibility.