APC Governor, Rauf Aregbesola of Osun state has charged university graduates to dump their certificates and to take up farming as a viable means of livelihood. 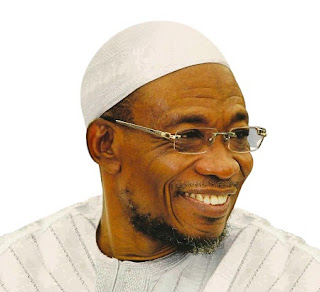 While delivering a speech at the 6th Convocation Ceremony of Fountain University, Osogbo, Osun State Governor, Rauf Aregbesola, charged university graduates to dump their certificates and go back to the farm, urging them to see agriculture as viable alternative to white collar job.
The governor who has not paid his state’s workers for several months now, said the call was necessary due to the menace of unemployment among youths, adding that the present economic situation has shown Nigerians the need to encourage farming as the only alternative to crude oil.
He explained that there was no aspect of life that could do without agriculture, saying Nigerian graduates must henceforth stop searching for formal jobs that realistically remained elusive, and called for productivity, resilience and hard-work among Nigerians, stressing that the present nation’s economy demands one to be self-employed.
Aregbesola noted that there is no other alternative to sustain Nigerian economy than to build and encourage requisite interest in agriculture and brace up with anything that could promote food security.
The governor maintained that all Nigerians, as a matter of urgency should invest in things that would enhance farming in the next five years if truly the nation was ready to overcome her present economic challenges.
“There is need for us , especially our young graduand’s to lead the nation in promoting agriculture as the only realistic surviving alternative to economy.
“We must not but embrace farming because it is only agriculture that has direct links to all aspects of life.
“Nigeria has grown to the stage through which her food production capacity must be urgently expanded to meet the general needs of the citizenry and as well enhance exportation.
“The time to enhance productivity has come. We must all embrace productivity. We must produce whatever we desire to consume”, he added.