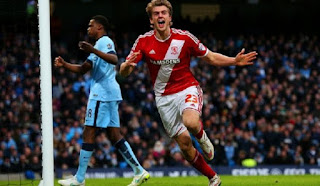 Patrick Bamford is set to undergo a medical at Middlesbrough ahead of a £10m move fromChelsea, according to the Daily Telegraph.
Bamford was recalled from his loan spell at Burnley this week, having also been on loan at MK Dons, Derby, Crystal Palace and Norwich.
Bamford scored 17 goals in the 2014/15 Championship season on loan at Boro.
Bamford leaves Chelsea without ever making a senior appearance for the club he joined from Nottingham Forest for £1.5m five years ago. He has been loaned out to six different clubs, including Middlesbrough
With 18 months remaining on his contract at Chelsea and no prospect of breaking through at Stamford Bridge, Bamford was keen to secure a permanent transfer and avoid another loan move.
Patrick Bamford will  be hoping that a fresh start at Middlesbrough helps to reignite the promising career that has stalled ever since he left the Riverside a little under two years ago.