The Central Bank of Nigeria (CBN) has alerted Nigerians to the circulation of fake 100 banknotes of Hong Kong Dollar. 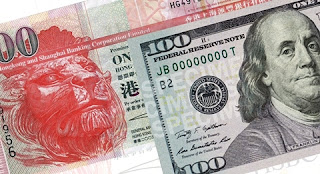 In an official circular to all authorised dealers, Bureau De Change operators and the general public, the Central Bank of Nigeria (CBN) has alerted Nigerians to the circulation of fake 100 banknotes of Hong Kong Dollar (HK$100).
The circular which was issued by CBN’s acting Director of Trade & Exchange Department, WD Gotring, reveals that the alarm was raised by the Hong Kong authorities on the circulation of the fake currency.

The circular read:
“The fake notes which were printed on normal A4 paper using inkjet printers are of poor quality, lacked embossment and the feel of security features.The silver marks were stuck on the notes to appear like the holographic security thread on real bills.Also the HK$100 numerals failed to turn gold and green when viewed from different angles.
“For the avoidance of doubt, members of the public are hereby advised  that the genuine Hong Kong Dollar banknotes has the following features: the colour and features of the notes shift when viewed at different angles; the holographic windowed thread shows a complete metallic thread when viewed under light, and when rubbed on the surface, the bill gives an embossed feeling.”