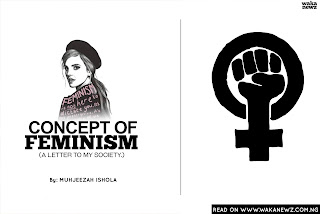 CONCEPT OF FEMINISM, A LETTER TO MY SOCIETY.
In this world we only have two gender (a man and a woman),I have seen women who are being treated like a rag, I have seen women who are been beaten to death, I have seen young girls who are been raped to death. The question comes why are we suffering?, why are we being treated like this?,Why are we forced into marriage at a very young age?, Why is it that families only recognized males and not females?, why is it that our brothers can go to schools and we cant?, why is it that we are always under a man? We give in so much into the society but we are treated badly in return .Many young girls are there suffering from a life trauma(RAPING),many women are there crying and weeping everyday just because of the unbearable pain caused by their husband. Now the issue of feminism comes. An interdisciplinary approach to issues of equality and equity based on gender, gender expression, gender identity, sex, and sexuality as understood through social theories and political activism. In general, feminists are people who try to acknowledge social inequality based on gender and stop it from continuing. Feminists point out that in most cultures throughout history men have received more opportunities than women.
And I wondered why the society really hate them, is it that we misunderstood what the goal of feminism is? Some people imagine that all feminists are angry, bitter women who only want to control men. I’m a feminist. That does not mean that I aspire to take a place of or to be like the man. What it means is that I don’t want to be limited or given less opportunities than the man. It means that I longed for a world where opportunities are equal. It means that I believe our gender has nothing to do with our level of intelligence or intellectual capabilities .it means that I dare to believe I am more than just a house wife, helping mate and more than just a body that can reproduce.
WRITTEN BY : MUHJEEZAH ISHOLA

ALSO READ  [Poem] Sitting on the coast (By Larrypresh)